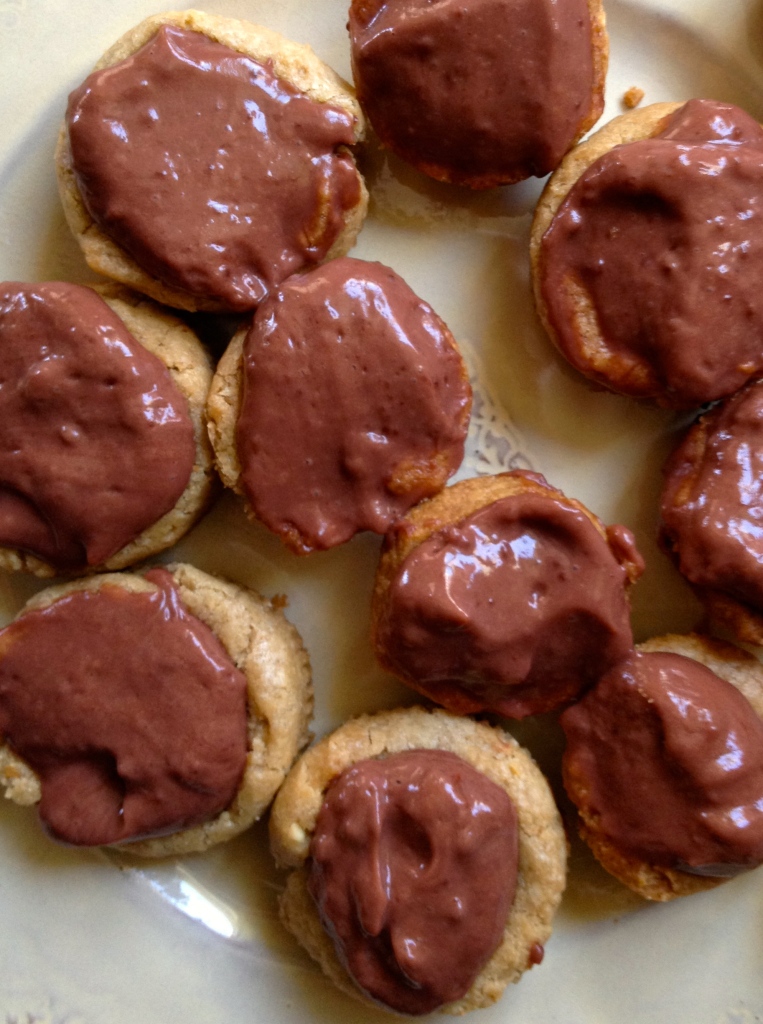 While they can’t be found yet on store shelves, you’ll see them soon. . . Gluten Free Peanut Butter Cookie Dough is coming, and I was lucky enough to bake some up this weekend. While they are amazing plain, I experimented with a reverse peanut butter cup. After baking them in muffin tins, I filled them with chocolate pudding. Wow — so good. The kids also reminded me I could make it even easier by using Nutella as filling. However you choose to dress them up or down, you are in for a real treat with these.

You’ll need a package of Gluten Free Cookies (this will totally work with Chocolate Chunk or Fudge Brownie varieties too).

A muffin tin with some muffin paper cups.

Pudding or Nutella or Your favorite filling.

Preheat the oven to 325, put the cookie dough into the muffin papers in the tins.

Bake according to the directions, and right before they are done, I use a spoon to press down the middle; this will let you have more filling room . .

Let them cool a bit and FILL!

Sunday morning, I was feeling especially lazy, but Sunday family brunch is a big deal in our house, so this quick recipe made it seem as special as ever. It’s essential some gussied-up eggs poured over an impromptu biscuit crust. EASY.

A can of Immaculate Baking Biscuits

6 slices of bacon, chopped up.

Preheat the oven to 375, pop open the can (with care), and using about 6 biscuits, layer the bottom of a 9×9 baking dish with them. You can see, I’ve broken some in half and simply pinched together the holes. It’s ok if some of the egg mixture leaks through. You’ll have a biscuit or two left over that I saved for baking later as a quick snack.

In a bowl, scramble the eggs and cheese, and then add the bacon and shallot mixture. Mix it all up and pour it over the biscuit crust. 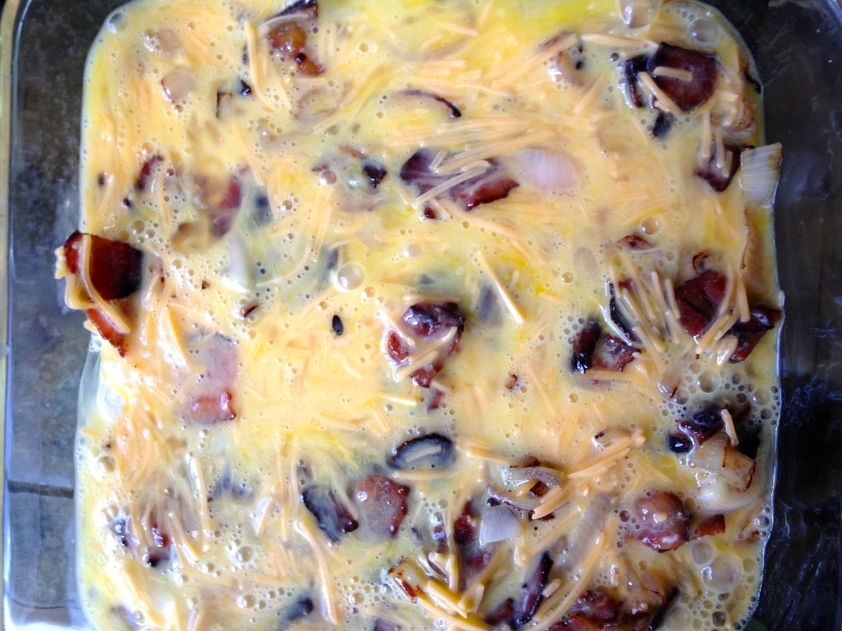 Pop it in the oven and bake for about 35-40 minutes, until the eggs rise and firm up. Let cool a bit, and slice. A big hit.

One of my kids is not a fan of leftovers for lunch, but if I recycle the leftovers in some way, he’s none the wiser. So one morning, after grilling way too much steak the night before, I chopped up the meat, mixed in some cheddar cheese and put it between 2 squares (or 4 triangles) of crescent rolls. A huge hit, and requested again for later this week. I imagine it could be great with bacon and eggs, chicken, and I’ve been challenged to try it with left over moo shu tofu.

Once you decide on the stuffing, here’s all you need to do.

Preheat the oven to 350 and open the crescent roll canister (carefully!).Unroll a “square,” but don’t separate as you normally would into triangles. Use a fork to rbing the perforation together a bit.

Put the filling into the center, leaving about a half inch around the border of the dough.

Grab another square of dough and, again,  smooth over the perforations with a fork. Place on top of the other filled square, and use a fork to seal the edges.

Bake until the dough browns a bit (about 15 minutes) and let cool since the pocket will be HOT!

Wrap in waxed paper, pack in lunch box, and wait for the after school compliments! 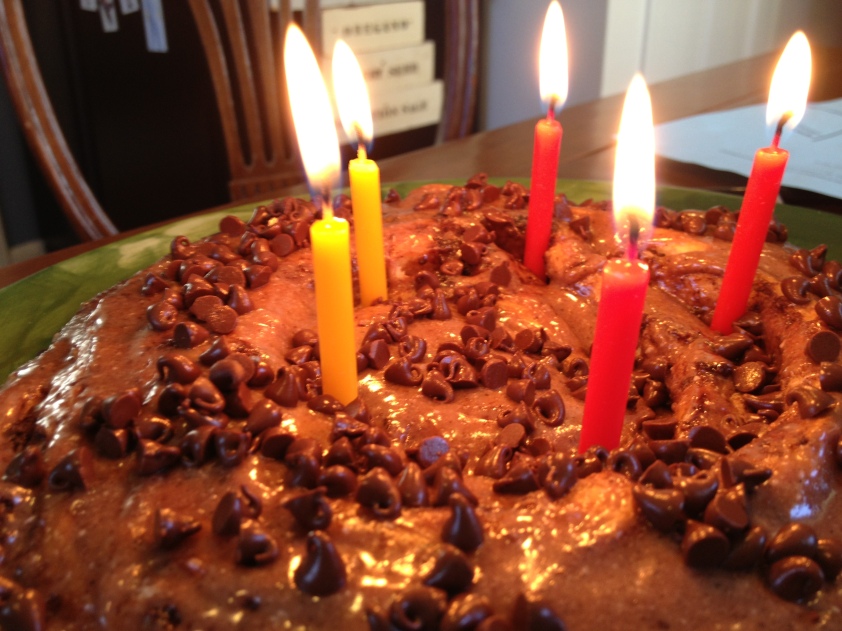 Saturday morning, the kids decided at the last minute to have some friends over, and upon arrival we learned it was someone’s birthday. Since it was a beautiful day, and I felt like getting into the garden for a bit, I was loathe to whip together a cake from scratch, so knowing the birthday boy was a chocolate lover, I improvised! With only a can of Chocolate Sweet Rolls on hand, I fashioned this 20-minute chocolate “cake.” So easy.

A can of Immaculate Baking Chocolate Rolls (set aside icing)

A tablespoon of Cocoa

Preheat the oven to 350, and open the can (carefully — under pressure!). Set aside icing. Place one roll in tact in the center of a baking sheet. Take a second roll and unravel. Wrap this roll around the first one and repeat until you have a big roll. 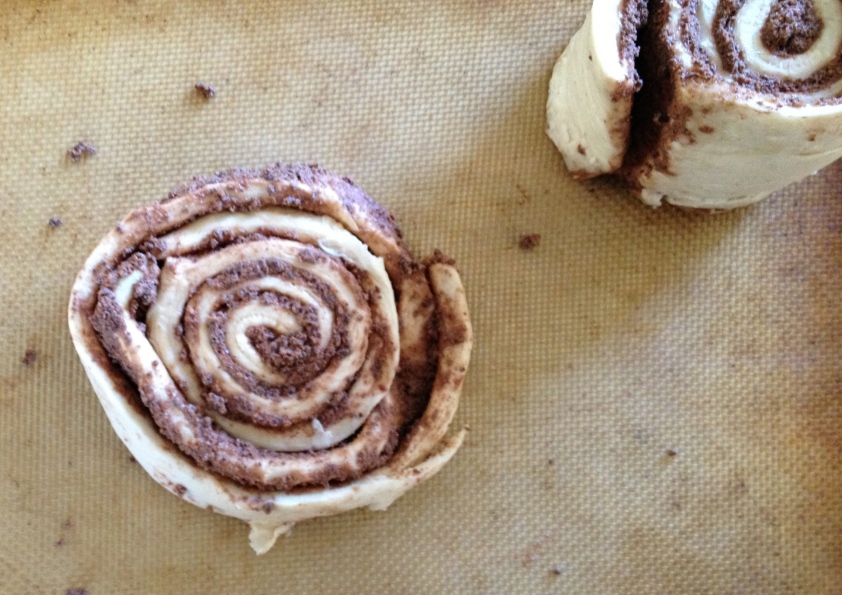 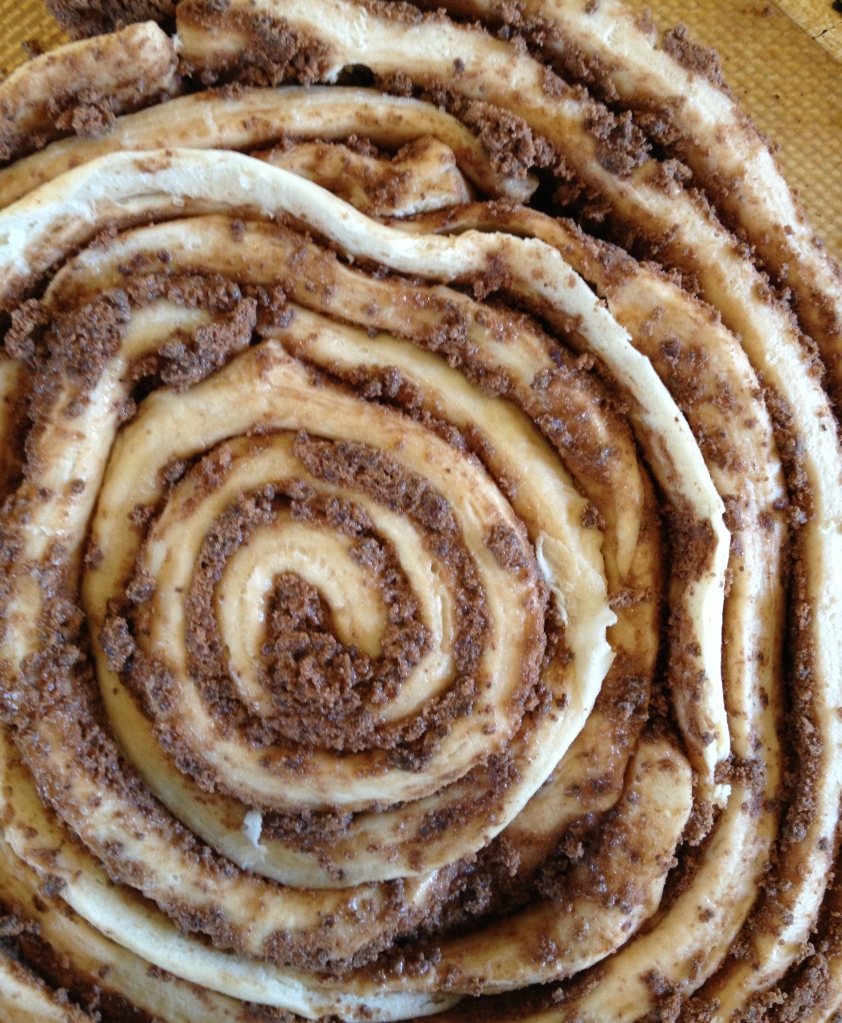 Bake. Watch it closely, since you want the center to cook all the way.

While it’s baking, put the icing into a bowl, add the cocoa and mix together. 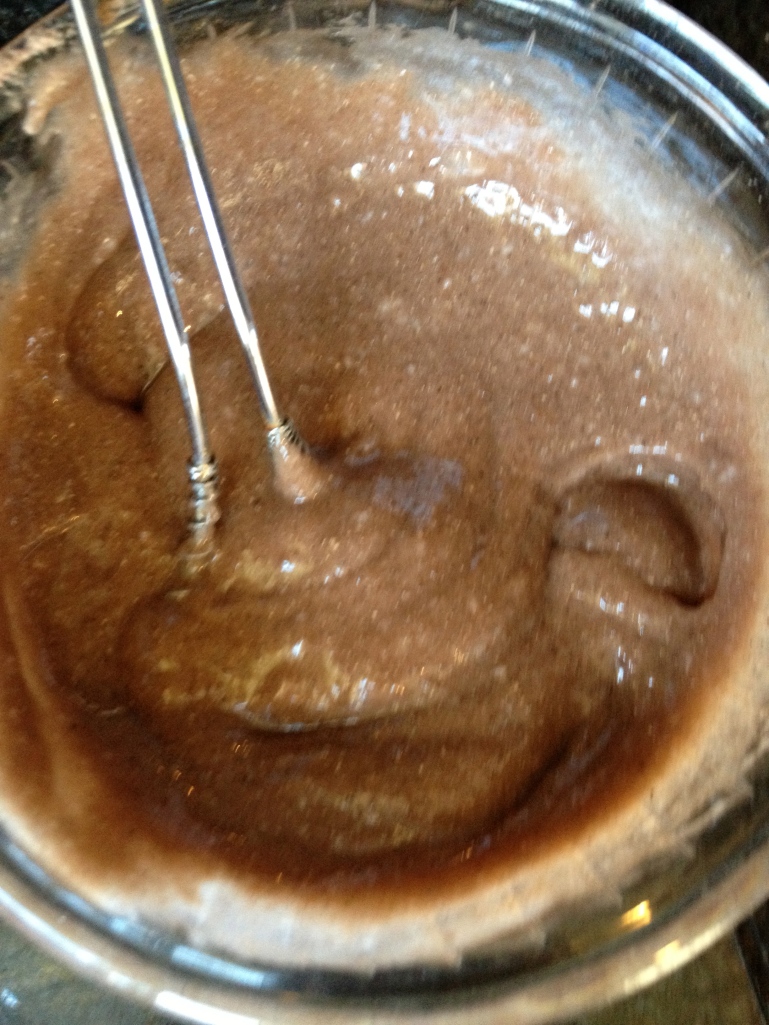 Remove the “cake” from the oven (about 20 minutes) and let cool for a bit.

Spread the “frosting” and adorn with chocolate chips and candles. Voila!

Cut as you would a cake.

Special thanks to Susanne Pepple for sending along this great recipe. I made them for my family over the weekend, and they were amazing!

Spray muffin tin with nonstick coating. Press biscuits into each tin, Sprinkle with cheese. Stir together egg, milk,salt & pepper, add veggies. Pour into muffin cups. Do not overfill. Place on baking sheet. Bake 375 for 18 minutes or until puffed and center comes out clean.

I discovered that my muffin tins are a bit shallow (sorry, tins), so in order not to overfill, I might slice the biscuits in half lengthwise. This give you more space to work with (and then you only need 1 can of biscuits). 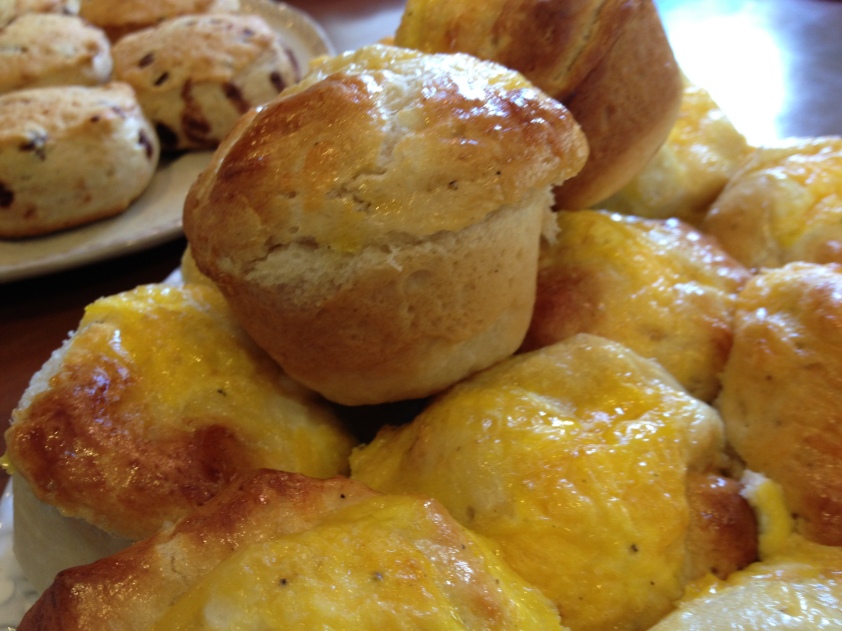 This Sunday, after an Easter Egg Hunt, we’ll be heading out to see some friends and family. Since we’ve been waiting for Spring for so long, and my neighbors have been lovely about helping us all shovel out, I’m making some Spring Baskets with goodies to share before we venture. With a few extra baskets lying around, I am baking up Cranberry Orange and Chocolate Rolls. Bake them as you normally would, spread the icing, and top with coconut, pecans, and chocolate chips. 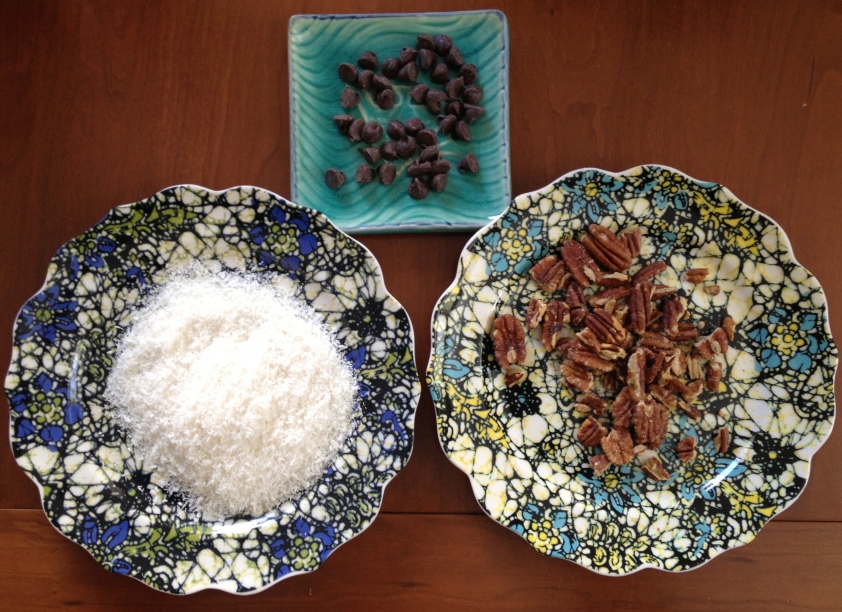 Once they are cooled a tiny bit — I still want them to be warm – I’ll put them all in a basket for a fun delivery. 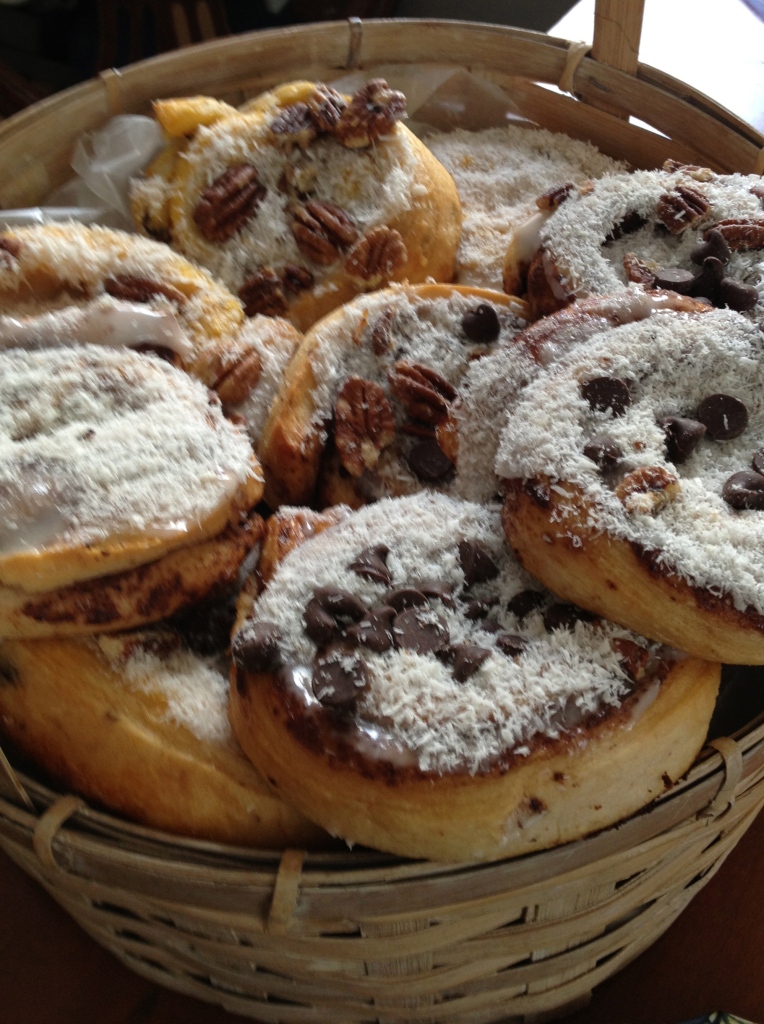 What am I bringing to Easter Dinner? A basket of biscuits and crescent rolls, complete with my last jar of incredible, homemade raspberry jam. These are a perfect addition for dinner or post-dinner snacking — even lunches the next day. 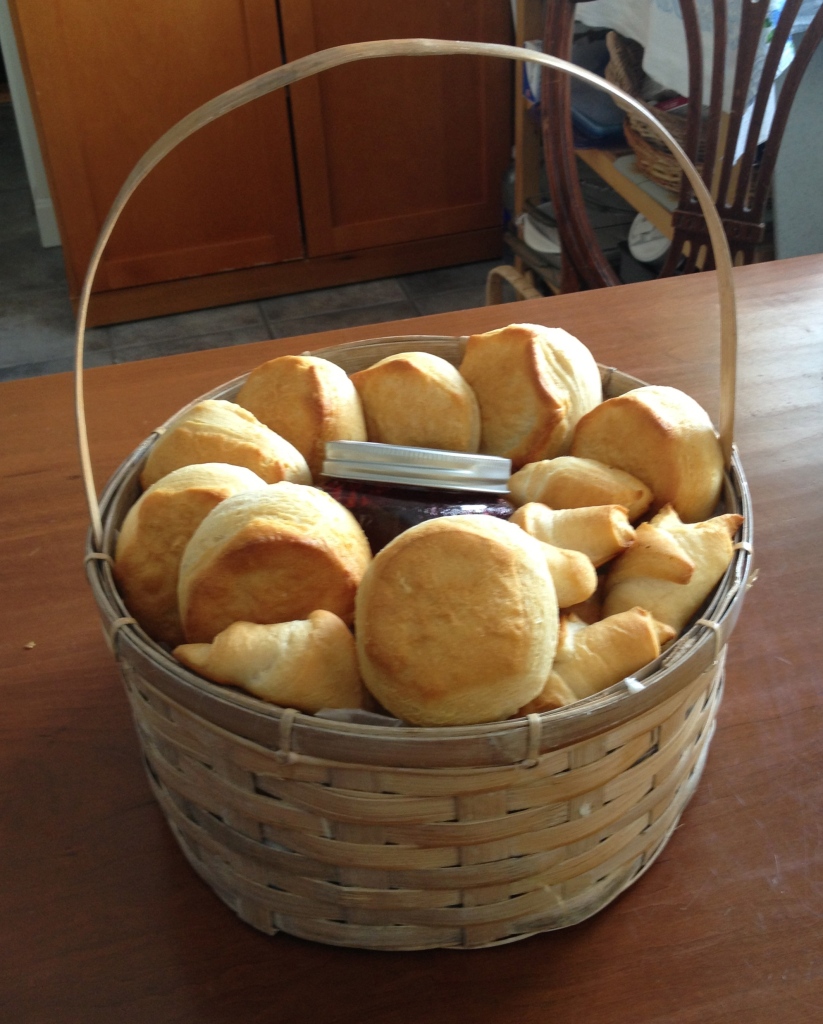 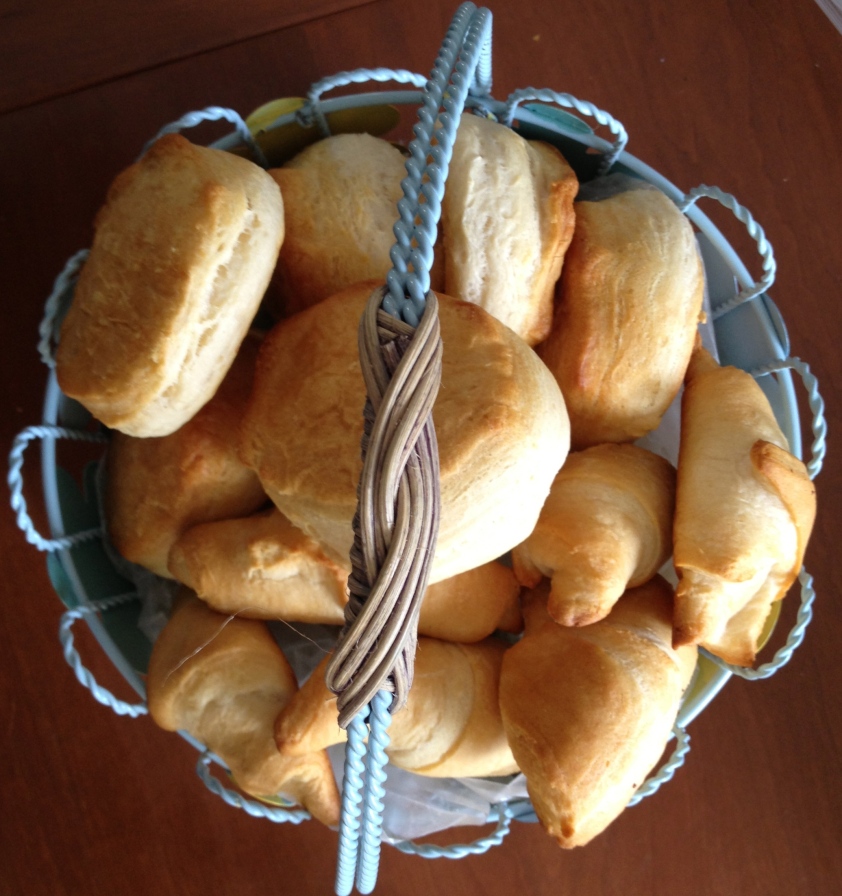 I’ll admit that I sometimes fall into a rut with desserts, and for a long time, cinnamon rolls meant breakfast, but needing a quick dessert and having some not so fresh apples and a can of cinnamon rolls, this easy, delicious tart was born.

A Can of Cinnamon Rolls

3 Apples (I had Granny Smith on hand)

A Skillet and Parchment Paper.

Preheat the oven and open the can very carefully. Put the icing aside for later. Line the skillet with parchment or baking paper.

On some waxed paper, unravel a roll and cut in half. Place it in the bottom of the skillet and continue cutting to fit the shape of the skillet. When you are done, the bottom should be covered. Pinch together the separate strips. 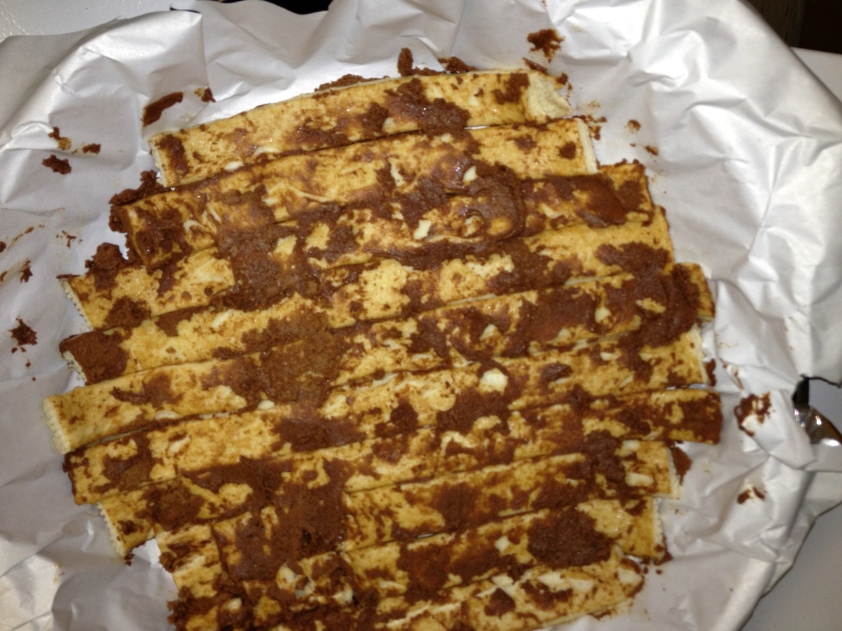 In a bowl, peel and slice the apples, mix with sugar and cinnamon, and layer over the top of cinnamon un-rolls.

Bake for about 30 minutes.

Let cool for about 5 or 10 minutes, transfer to a plate, ice with the icing packet, and slice. You might even add some creme fraiche, whipped cream, or vanilla ice cream for more decadence. Then, watch it disappear . . . 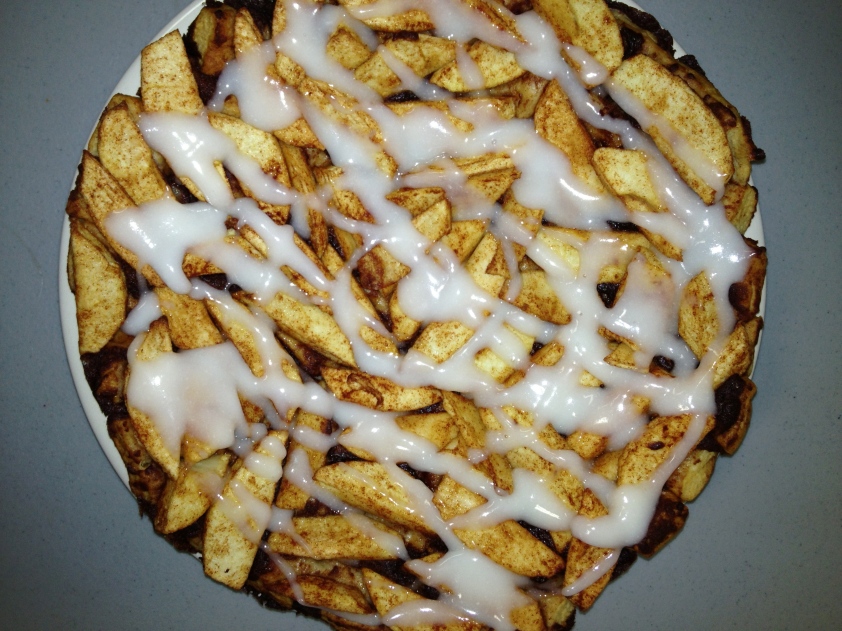 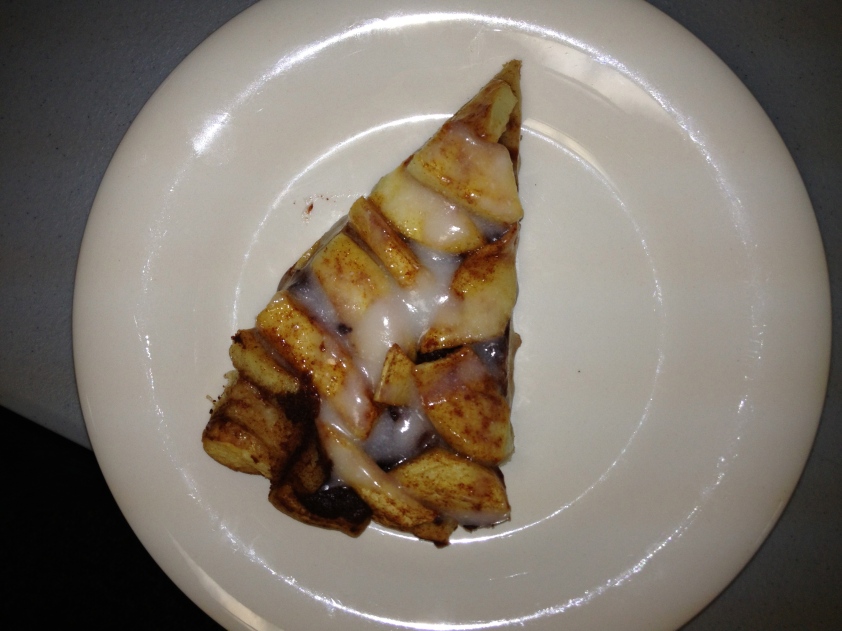